I’m thrilled to announce the launch of our new Giving Program. Over the years we’ve done what we could to support charities and non-profits, usually through donating products to auctions and the like. Starting in 2016 we’re making charitable giving a part of our business model and I couldn’t be more excited.

For the first quarter of 2016 I’m so happy to be giving to St. Jude Children’s Research Hospital.

The kids whom St. Jude treats are suffering from life-threatening childhood illnesses such as cancer and sickle cell disease, and many of the treatment protocols require care that can last for years. For example, the average cost for treating acute lymphoblastic leukemia, the most common form of childhood cancer, is more than $485,000 over a two to three year treatment plan.

Oh boy oh boy oh boy, do I have good news for you!!! One of the most common bits of feedback we get from you is that while you LOVE the Deep Conditioning Treatment, you do NOT love that it can be hard to get out of the bottle.

Those days are over, my friend. Your beloved DT now comes with a handy pump. (hyperlink to DT page on site where they can see it with the pump)  We’ve had many people test it and the response was a resounding, “DO IT!” :)

We literally searched the globe for something that would work with the thickness of the DT and finally found it in Italy. No joke, we actually found the pump at a trade show in Italy and are importing them specifically for use with DT. So if you felt like we just weren’t listening to you these last few years, please know we were fervently working on it behind the scenes. :)

We hope this makes your hair routine easier. :) Happy New Year and have a curly day!

I'm very excited to tell you that Jessicurl is being carried in a wonderful salon in Milan, Italy, I Love Riccio. It has been a pleasure to communicate with Tirrico Fulvio, and I'm thrilled to bring you his interview below. If you're in Milan I strongly encourage you to go in for a cut, but you can also buy Jessicurl online through their online shop.

I started 20 years ago with the classical training, I specializes in curly hair for 5 years

I am located in the north of Italy, Milan the fashion city

A wonderful before and after pic of a curly client.

What made you go into the hair busines?

My father is a hairdresser and when I went at school in the afternoon I always went to help in the shop. Then he made me decide to take this job was the opportunity to travel the world, and the chance to make career.

If you specialize in curly hair, what made you adopt that focus?

We have some new accessories in our online store that I want to make sure you know about. :)

The first is the Solano Universal Diffuser.

Sometimes you leave your diffuser at a hotel or at a friend’s house but don’t want to buy a whole new hair dryer/diffuser combo. Buying a diffuser by itself can be tricky as they don’t always fit on every hair dryer. I’ve tried this Solano Universal Diffuser on a variety of hair dryers and so far it has fit on all of them. :)

We’re also excited to be carrying a full selection of Curlformers, a fun way to change up your curls when you feel like you want something a little different. :) 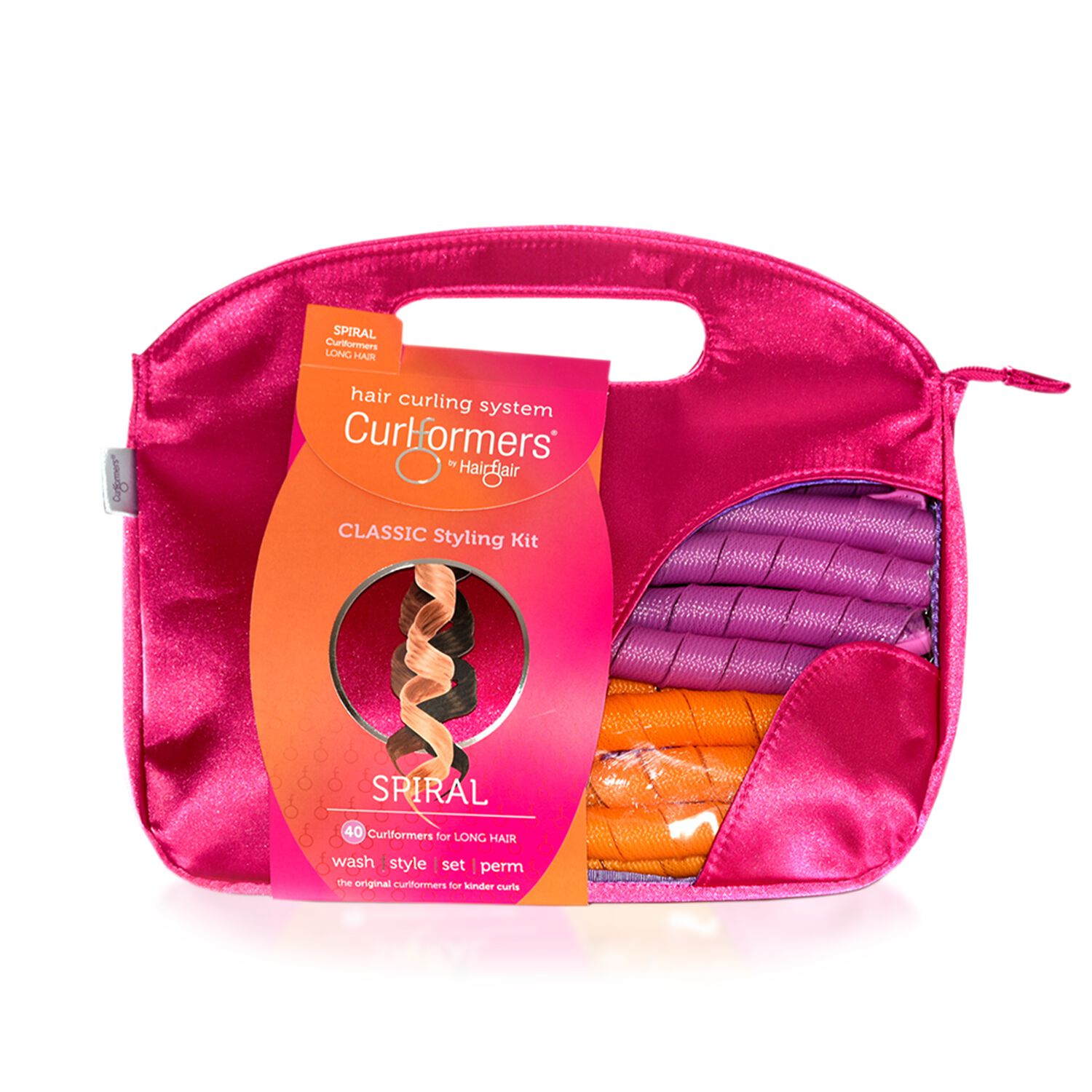 Lisa Baker is a curly stylist in Southern California who is passionate about curly hair. I haven't yet had the pleasure of meeting her yet but as you can see in the interview and pictures below, she is a master at what she does. If you live in her area I'd suggest you check her out for a cut, and to stock up on your Jessicurl products. :) Thanks for letting me feature you on my blog, Lisa!

Luna Hair Studio has been in business for 15 years. I have 30 years of experience.

What made you go into the hair business?

I wanted a job that allowed opportunity for creativity. I always feel best when I’m creating something and the idea of creating hairstyles excited me. I’ve always enjoyed making people feel good about themselves and doing hair allowed for that.

If you specialize in curly hair, what made you adopt that focus?

I've posted about the Curly Hair Artistry group before,as they are a collective of dedicated, passionate curly hair stylists over the globe that learn from each other about cutting techniques, styling and products.

Their updated website is a fabulous resource for finding a CHA stylist near you. I've had my hair cut by several of them and have always loved it. And, many of them carry Jessiurl! :)

It's that time of year again. :) We know from your feedback that you love Jessicurl products (and we thank you!), and we'd love if you'd tell the world through NaturallyCurly.com's annual Best Of The Best awards. It's like the curly hair Oscars and we've been thrilled and honored to win in various catagories every year since the awards were created.

The best part for you is that everyone who completes the survey is entered to win a collection of ALL of the winning products! Not a bad deal, eh? :)

You can fill out the survey here.

Please note that in order for your entry to qualify, the specific product must be listed. For instance, "Jessicurl Hair Cleansing Cream" rather than simply "Jessicurl."

Thank you in advance for taking the time to tell the world how much you love Jessicurl! Have a curly day!

It was bound to happen, but somehow I didn’t really see it coming. I was just carrying on, working, living, laughing, and then one day: BAM. A Facebook notification that included words like “invited to” and “20 year high school reunion.”

Wait, huh? Did my Facebook get hacked? Surely this can’t be directed at me. I’m not old enough for such nonsense.

I wasn’t immediately certain I’d go. My perception was always that people go to those things to re-connect with old friends or to prove how awesome they’re doing now. The former isn’t much of an issue now in the social media age, and the latter really didn’t interest me. That might come as a surprise to some of you.

“But Jess!”, you might be thinking. “You’re always telling us how the teasing and taunting about your hair is what prompted you to start Jessicurl! Didn’t you want to go show them that you’re not Mushroom Head anymore?!”

I guess my answer is, not really. Yes, those experiences are a large part of the Jessicurl creation story, but it’s been 20 years. Isn’t it time to get over high school?

If you’ve been reading this blog for a while, you’ll know this is not the first time I’ve mentioned Curl Master (official title) Scott Musgrave.

Scott is a stylist and curl-enthusiast based in Cary, NC. I featured him in on this blog last year when he began carrying Jessicurl.

He is also founder of the Curly Hair Artistry group and as such as helped inspire and inform curly hair stylists around the world.

In short, Scott is THE MAN when it comes to caring for and appreciating curls.

So you can bet I was SUPER excited when I found myself booking a trip to North Carolina last month. I was there for the Curls Around The World event and just knew I had to finally meet Scott in person, and most importantly, get one of his famous haircuts. :) I had been “saving” a badly-needed trim for this occasion so he really had his work cut out for him. (I hadn’t had a trim since February, as I knew I’d be seeing Scott and wanted it to get as long as possible.)

I had THE best time meeting Scott, chatting with him about all things curly hair and watching the care he took with trimming my hair. But really, I can explain it, or I can just post a bunch of pictures to show you. :) On to the pictures!

I first met Dianne Nola a few years ago after she called to ask some questions about Jessicurl. On a trip to San Francisco I went to meet her in person and I swear, I thought our combined energy was going to cause a brown-out. :) She is abundantly friendly, upbeat, positive and just lifts the spirits of anyone around her. A year or so later I had her cut my hair, so I can vouch that she’s also talented with a pair of scissors! :) I’m pleased to feature her today on my blog. If you’re in or near San Francisco, you won’t be disappointed by your time with Dianne. :)

I've been professionally doing hair since 1988. I've owned my own business for the past 20 years.

Inside a small salon called, Surreal You Hair Design. It's located a block south of Golden Gate Park in the Inner Sunset district of San Francisco, CA. The way to reach me is through my web site: www.nolastudio.com and phone: 415.786.6402.

What made you go into the hair business?

Provides all day hold and frizz control for all hair types. For a while now, our customers have been asking us to provide them with a stronger hold styling product. If we had to rate our current styling line up, Gelebration Spray and Rockin’ Ringlets would be light hold, and Confident Coils would be medium. That definitely leaves room in the category for a firmer hold styling product and we hear you that you’ve been filling that need elsewhere. Well, you don’t have to anymore, Jessicurl fans! After months of testing, we’re super excited to introduce Spiralicious Styling Gel, the thicker, stronger hold styler you’ve been asking for.